Files that became encrypted and appended with a random four-character extension indicate a Cerber ransomware attack that requires an urgent fix on the user’s end.

Updated in July 2017. The term “Cerber”, which is somewhat reminiscent of a scary mythical creature’s name, denotes a piece of ransomware that may cause infected people just about as much terror. The main concern for victims in terms of this threat has to do with the risk of losing their personal files, which is a likely outcome of the attack if the extortionists’ demands are not met. The virus uses AES cryptographic standard to encrypt the user’s most important files, focusing on popular data formats found on the target computer’s hard drive, network shares and removable media. On the outside, these items become considerably skewed as well – the filenames undergo scrambling beyond identification, where each one morphs into a random 10-character string. In addition to this, the ransomware concatenates four hexadecimal characters to encrypted data entries. This suffix is unique for every individual extortion scenario, because it matches a computer-specific MachineGuid registry value. As a result, a sample document will turn into a gibberish string like LQpHq5aNrJ.3f81. Obviously, the user is unable to open any of those.

When the Cerber virus is installed, the first thing it does is determine the country that the machine is located in. If it’s in a country that matches the infection’s hard-coded blacklist mostly composed of Eastern European states, then no further action is taken. Otherwise, the targeted system gets configured to go through several reboots so that the malicious code takes effect. To this end, the ransomware displays a number of rogue system notifications which, once closed manually, trigger a forcible restart of the PC.

Learn how the Cerber ransomware has evolved over time

The next phase is encryption proper. The malware disregards objects in several directories, including Program Files, ProgramData, Windows, Drivers, and AppData\Local. In the meanwhile, it encodes everything found during the HDD and network drives scan with the above-mentioned symmetric Advanced Encryption Standard. Cerber then adds ransom instructions to the desktop as well as each folder that got hit. The original variant of the perpetrating program would drop the following walkthroughs: # DECRYPT MY FILES #.html, # DECRYPT MY FILES #.txt and # DECRYPT MY FILES #.vbs. The latest edition of this Trojan called CRBR Encryptor, which was discovered in July 2017, has switched to using a different set of decryption how-to manuals, namely _R_E_A_D___T_H_I_S___[random]_.hta and _R_E_A_D___T_H_I_S___[random]_.txt. An additional JPEG version of ransom notes straightforwardly replaces the original desktop wallpaper to put additional pressure on the infected person.

According to these notes, the victim needs to navigate to a Tor page titled “Cerber Decryptor” and use it to send 0.5 Bitcoin (about $1,100) as the ransom, doing which will supposedly make the file decryption tool available to download. The page also displays a countdown timer to add some urgency to the mix so that the plagued user submits the cryptocurrency within five days, or else the sum will become 1 Bitcoin. The darknet service in question allows deciphering one file free of charge, but that’s certainly cold comfort given the big picture of the quandary.

An unordinary hallmark sign of this infection is that it’s equipped with a VBScript based text-to-speech component that recurrently plays an audio message explaining what happened to the data and how to get it back. The message goes, “Your documents, photos, databases and other important files have been encrypted!“. This is, obviously, a clever scare tactic that makes the attack an awful nuisance, not just a commonplace cipher-backed predicament. Notwithstanding the whole sophistication of Cerber ransomware, some techniques can help victims restore their files without having to pay the fee or somehow crack the strong encryption.

When dealing with the Cerber threat, you can get a lot of mileage out of the Malwarebytes automatic security tool that will pinpoint and iron out the infection in minutes. Malwarebytes is one of the big names in the anti-malware industry with an immaculate track record of protecting systems against all prevalent forms of harmful code.

The solution uses artificial intelligence (AI) and machine learning to detect both known and zero-day threats, including potentially unwanted programs (PUPs), ransomware, exploits, and malicious sites. It boasts low system footprint, high scanning speed, and intuitive interface where every module clearly explains what it does. Follow the steps below to come through the malware predicament unscathed:

1. Download and install the latest version of Malwarebytes onto your PC.

As part of this step, you will be prompted to specify where you are installing the program (personal or work computer) and toggle the advanced setup options if you so desire. You can use all the premium features for 14 days free of charge.

2. Once the application is up and running, go ahead and click on the Scan button in the bottom middle part of the GUI. 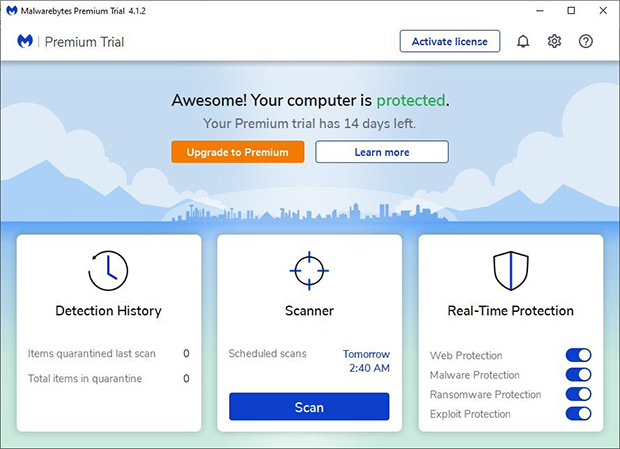 3. Wait until Malwarebytes checks for updates of its proprietary Katana detection engine and scans the memory, startup items, registry, and file system for threats. 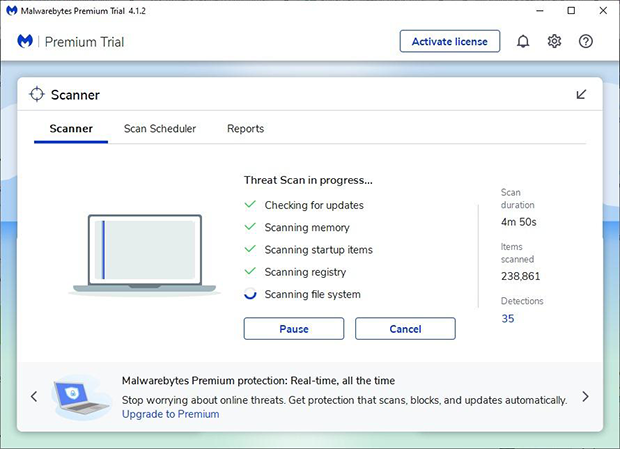 4. When the scan is completed, go over the report listing the infections that have been identified. Make sure there are checkmarks next to all the unwanted items and click on the Quarantine button as shown below. 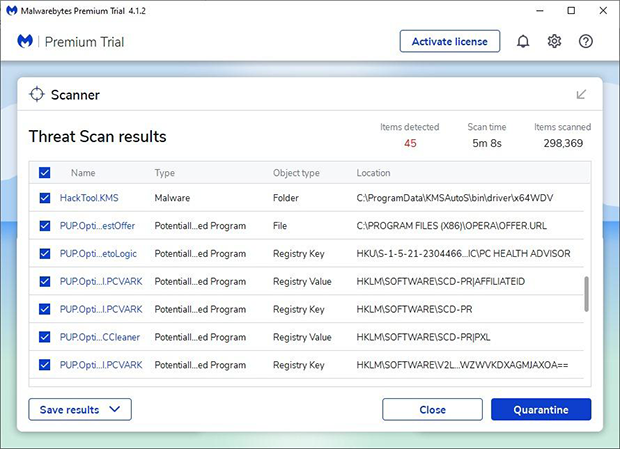 5. You will be prompted to restart your computer to finish the removal process. Click Yes to do it immediately or close the dialog and restart later on. 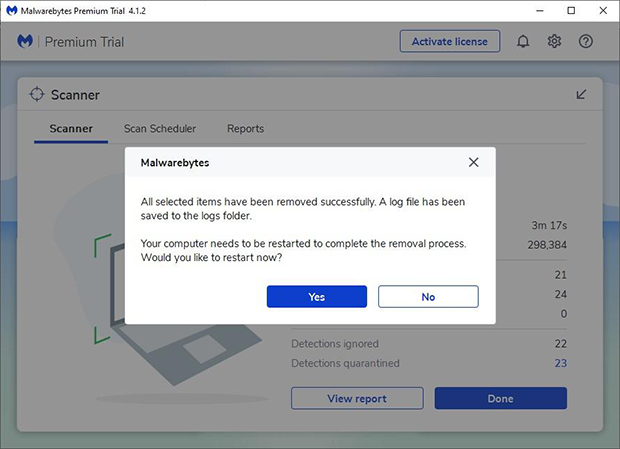 6. As soon as the threats have been moved to Quarantine, they can no longer harm your computer. If you are sure that you won’t need to restore any of those items at a later point, click on the Detection History pane at the bottom left of the Malwarebytes home screen, select the Quarantined items tab, and click Delete. 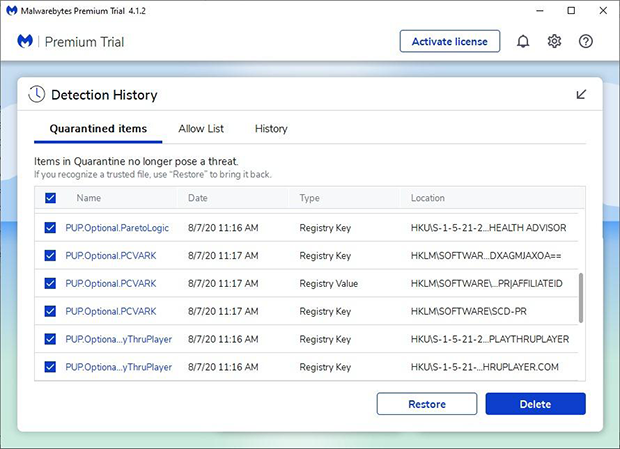 Some ransomware strains terminate themselves after completing the encryption job on a computer, but some don’t. Furthermore, the Cerber virus may prevent victims from using popular antimalware tools in order to stay on board for as long as possible. Under the circumstances, it may be necessary to utilize the Safe Mode with Networking or System Restore functionality.

Not only are you a lucky person in case you’ve been backing up your most important files, but you’re also a wise and prudent user. This isn’t necessarily a resource-heavy activity these days – in fact, some providers of online services are allocating a sufficient size of cloud storage space for free so that every customer can easily upload their critical data without paying a penny. Having removed the Cerber ransomware, therefore, all you have to do is download your stuff from the remote server or transfer it all from an external piece of hardware if that’s the case.

To avoid Cerber ransomware and other file-encrypting infections in the future, follow several simple recommendations: