Emotet is a high-profile virus causing severe damage to computer users and organizations, so it should be removed immediately if spotted to reduce the impact.

There are run-of-the-mill computer threats that do nothing more than annoy victims with popup ads or redirect their web browsers. The Trojan codenamed Emotet is an entirely different story. It is a self-propagating infection whose early versions surfaced back in 2014 and have been followed by continuously evolving iterations with multi-vector malicious mechanisms. Emotet was originally designed as a banking trojan zeroing in on users in Europe. Its current logic spans much more than money theft, though. It has additionally turned into a powerful instrument for distributing other random types of malware in the background. To top it off, the priority targets for the cybercriminal crew behind this nasty pest are organizations that operate networks of thousands of computers. Combined with top-notch antimalware evasion properties allowing it to slip below the radar of most security solutions, this polymorphic perpetrating code is a serious digital adversary that should be eradicated as soon as possible.

The Emotet virus can do the rounds autonomously within an enterprise environment – it suffices to get one computer infected. This contaminated host is then exploited to pass the payload over to the other machines on the same network. However, the baddie is also equipped with a spam module that communicates with the crooks’ Command and Control server and spews out booby-trapped emails to other potential victims. It’s the C&C that defines the contents of these toxic messages in real time, as well as the attached payloads.

The malicious spam generated by Emotet usually pretends to be from some reputable service provider, financial institution or government entity. For example, of the recent campaigns in rotation across the United States follows a “Tax Return Transcript” theme. The emails are disguised as if they were from the IRS (Internal Revenue Service). Also, a lot of these messages are camouflaged as invoices from various companies and providers. Whereas the subjects vary, all of these waves have a common denominator, namely the type of contagious attachments.

The embedded files are Microsoft Office documents that are presented in compatibility mode. It means the content is unreadable at first, with a Security Warning prompt saying, “Macros have been disabled” and trying to dupe the recipient into turning macros on. There aren’t many people out there security-minded enough to realize the risks of following such a recommendation. Macros have gained notoriety quite a while ago for being susceptible to unauthorized manipulation. These are VBA (Visual Basic for Applications) objects that allow for downloading and executing arbitrary binaries in a covert way. In other words, once macros have been enabled, the felons can remotely drop the Emotet payload onto a system without the user’s awareness.

The virus in question can brute-force administrative credentials and harness known vulnerabilities, such as the infamous EternalBlue loophole, to proliferate inside an IT ecosystem. Meanwhile, its self-contained spam functionality described above enables it to propagate beyond the infested organization. Speaking of the impacts, Emotet establishes persistence on target hosts by adding new registry values and a related entry in the Task Scheduler. Its executable is going to assume a different name on every plagued computer, which makes it hard to detect even with an effective enterprise security solution in place. Then, the virus traverses the infected network in search of proprietary data, such as e-banking passwords and cryptocurrency wallet credentials. While stealthily running, Emotet is continuously awaiting instructions from its Command and Control server. The malicious operators can have it download any malware onto enslaved workstations, including ransomware and adware.

All of these characteristics make Emotet an evasive menace that needs to be urgently eliminated from a PC or corporate network once found. In the case of an organization, this can be a lengthy and cumbersome process, because after the culprit is removed from one system, other still-poisoned computers may re-infect it. The walkthrough below should help get rid of this virus for good.

Use Control Panel to get rid of the Emotet virus 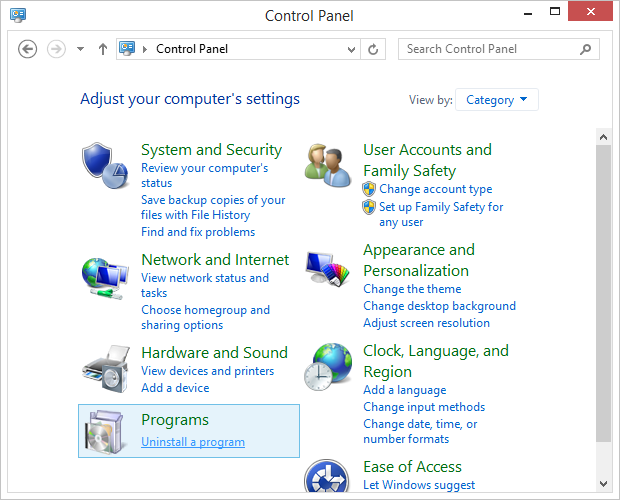 • To facilitate the process of locating the threat, sort the programs list by date to get the latest ones displayed at the very top. Look for a suspicious entry under the Name column, select it, click Uninstall and follow further directions to get the removal done. 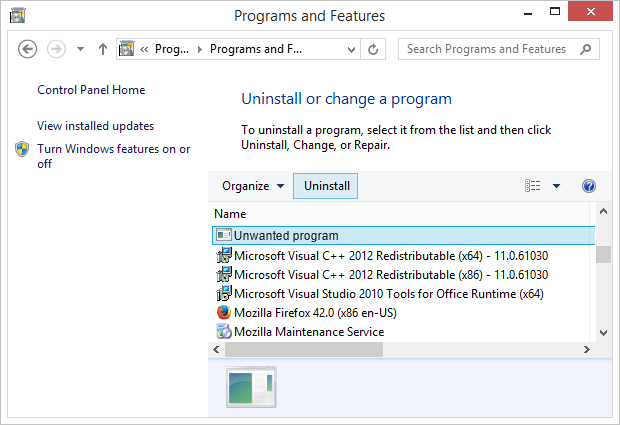 Automated removal of the Emotet virus